On November 25, the International BRICS Competition Law and Policy Centre held a strategic case-study session as part of the BRICS+ Digital Competition Forum in Rio de Janeiro. A hypothetical merger between the business empire of Elon Musk and the Chinese IT giant Bytedance was modeled. Participants were invited to discuss the potential and opportunities for cooperation between BRICS+ antitrust authorities on this deal.

Alexey Ivanov, Director of the BRICS Competition Law and Policy Centre, presented the case, stressing that Bytedance owns a variety of assets (including the popular short video platform TikTok), so the deal will allow Elon Musk to gain access to the Chinese market and attract a promising young audience, which is more drawn to visual rather than text content. In turn, the Chinese corporation will benefit from the deal as an opportunity to receive extensive investment. The merger would affect the interests of the BRICS countries, especially since India and Brazil provide a significant share of subscribers to Musk's recently acquired Twitter, which he presents as a "common digital town square" for free speech from around the world. 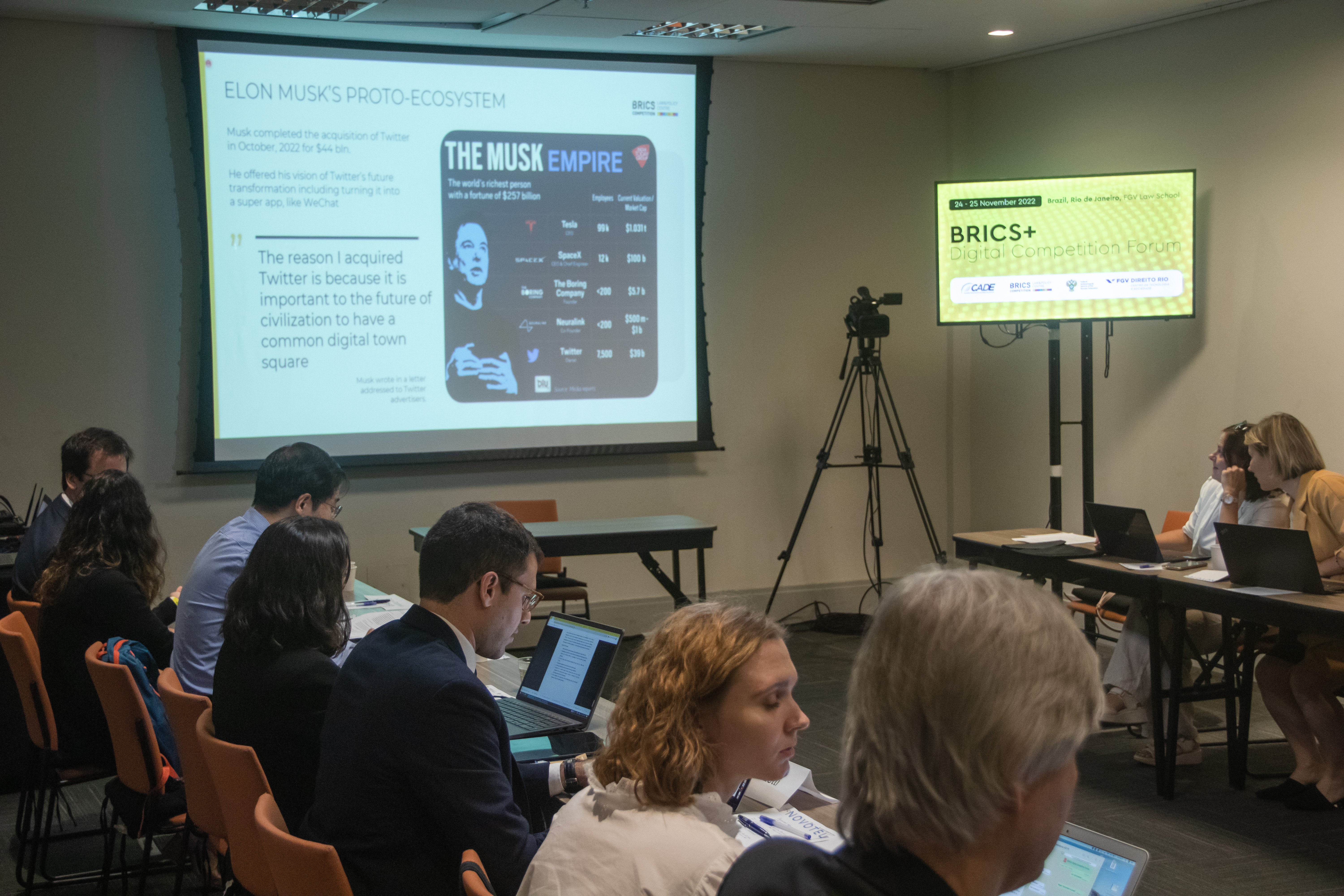 Jia Kai, Associate Professor at the School for Public Policy and Administration at the University of Electronic Science and Technology of China, proposed a business plan for a hypothetical deal and described possible strategies for the growth of the merged ecosystem, the overlap of different companies within it, and revenue models. Hypothetical regulatory clauses for the deal from Chinese antimonopoly authorities were also presented.

During the discussion of the proposed deal, the experts addressed various problems of international cooperation among the BRICS regulators and discussed the likely negative consequences of the deal as well as possible remedies  and corrective measures by the competition authorities. Andrey Tsyganov, Deputy Head of the Federal Antimonopoly Service (FAS) Russia, stressed that Russia and the BRICS countries have concluded bilateral intergovernmental agreements on cooperation in the field of competition, which will help strengthen cooperation and avoid contradictory decisions. In addition, there are model recommendations developed at the initiative of FAS Russia on the application of the waiver of confidentiality when reviewing economic concentration transactions in the BRICS countries. The main thing in the process of reviewing such a mega-merger is to take into account the opinion of Russian companies.

"There are a lot of different digital companies in Russia, from food delivery services to online retailers to news platforms, and we need to listen to all the players' opinions on this merger."

Itumeleng Lesofe, Senior Legal Analyst of the South African Competition Commission, shared his experience reviewing Google's acquisition of consumer electronics company Fitbit in 2020. A major challenge in cooperating with other regulators (this global merger required the approval of antitrust authorities in the EU, the U.S., Australia, Canada and Japan) was to harmonize the timing of the case. In this regard, it seems important to unify international procedural apparatuses and expand existing channels of communication, the expert noted. 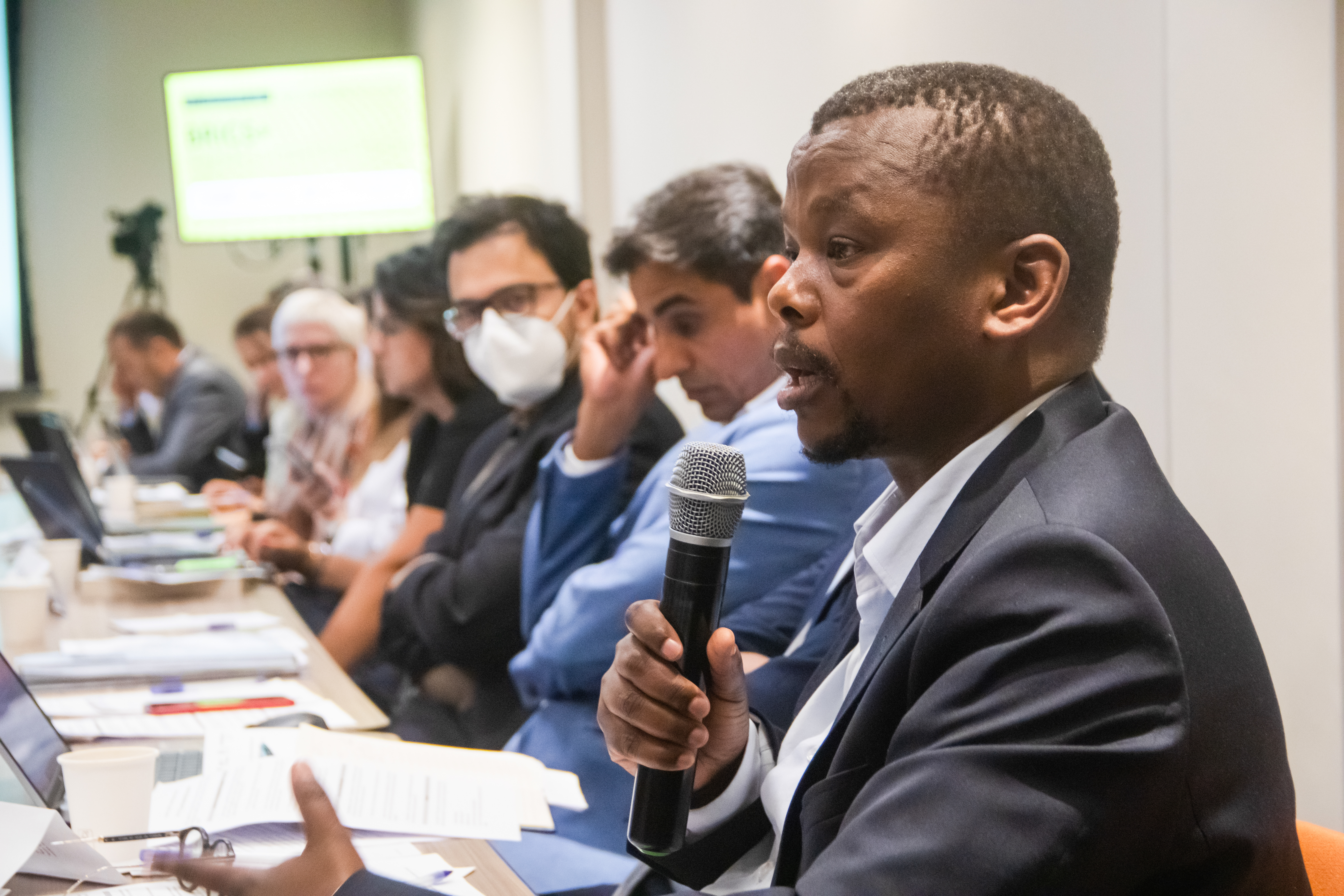 Tembinkosi Bonakele, Former Chairman of the South African Competition Commission, continued to speak about important conditions for successful international cooperation. He spoke about his experience in the International Competition Network (ICN), a network of competition authorities around the world focused on improving enforcement practices and developing proposals for the convergence of antitrust laws of different countries. Analysis of the proposed deal would require direct contact between representatives of BRICS competition authorities, both with employees of Elon Musk's companies and with each other, he is convinced.

"Сooperation needs funding — so that analysts could travel and see each other. We need person-to-person meetings not only at the level of heads of competition authorities, but also at lower levels. With personal interaction, you’ll get much more than the waiver will allow you to get." 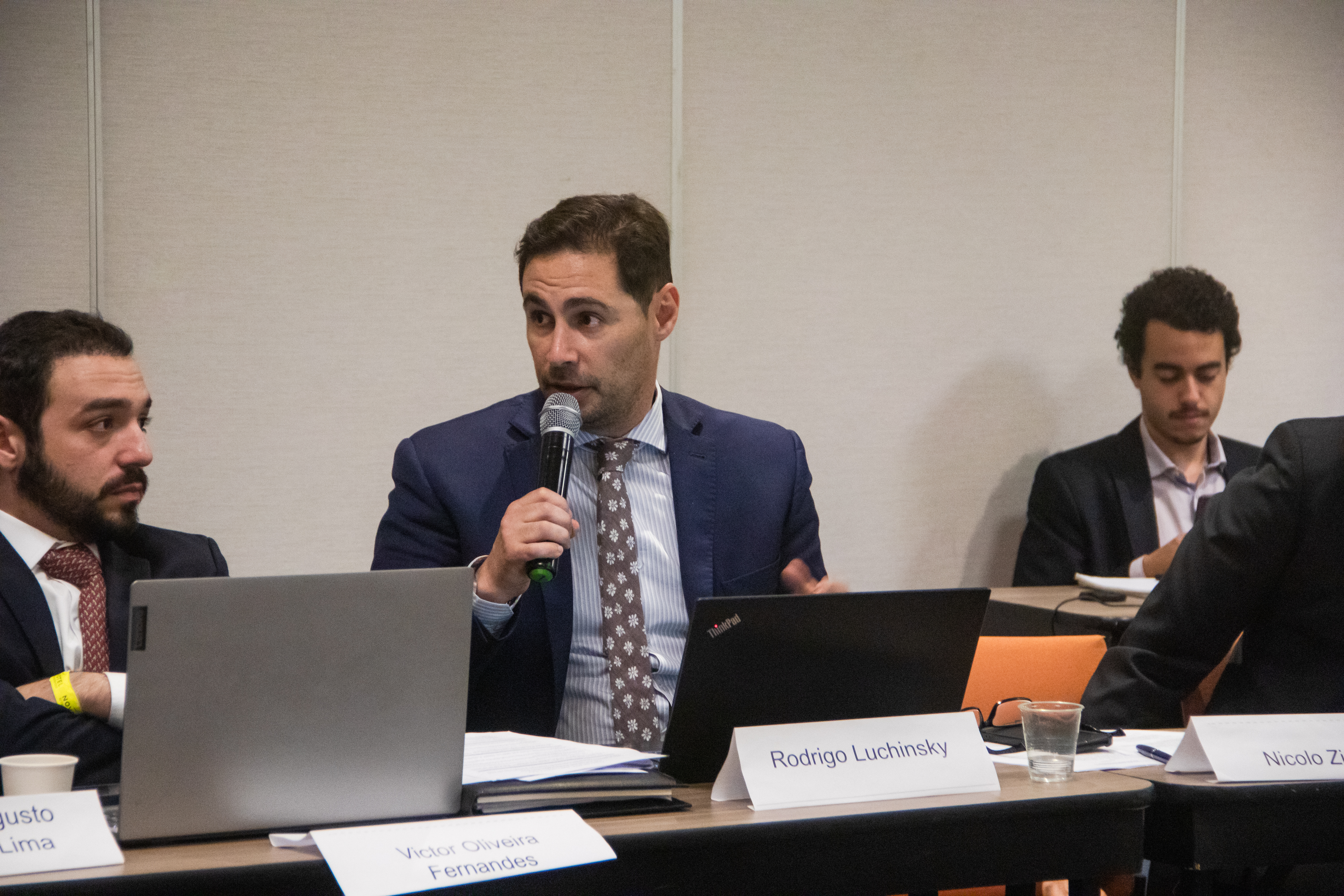 Rodrigo Luchinsky, President of NCDC of Argentina, said that Argentina's consumer protection and data security agencies would definitely be involved in considering a hypothetical deal. He considers one possible format for interagency cooperation within the BRICS to be the Egmont Group, an international association of financial intelligence units aimed at combating money laundering. The group has information exchange and coordination systems.

Turning to talk about the "theory of harm," Víctor Oliveira Fernandes, Commissioner of CADE, suggested to look at the deal in the context of fostering innovation. The social networking industry has a particular problem in this regard. For example, the Facebook-Instagram* deal did not lead to innovation — on the contrary, Instagram began to imitate other social networks: it introduced the Stories function, like Snapchat, and copied the Reels short video format from TikTok. A potential deal could reduce competition between the services of the Bytedance ecosystem and Elon Musk's proto-ecosystem of businesses and limit the development of innovation. 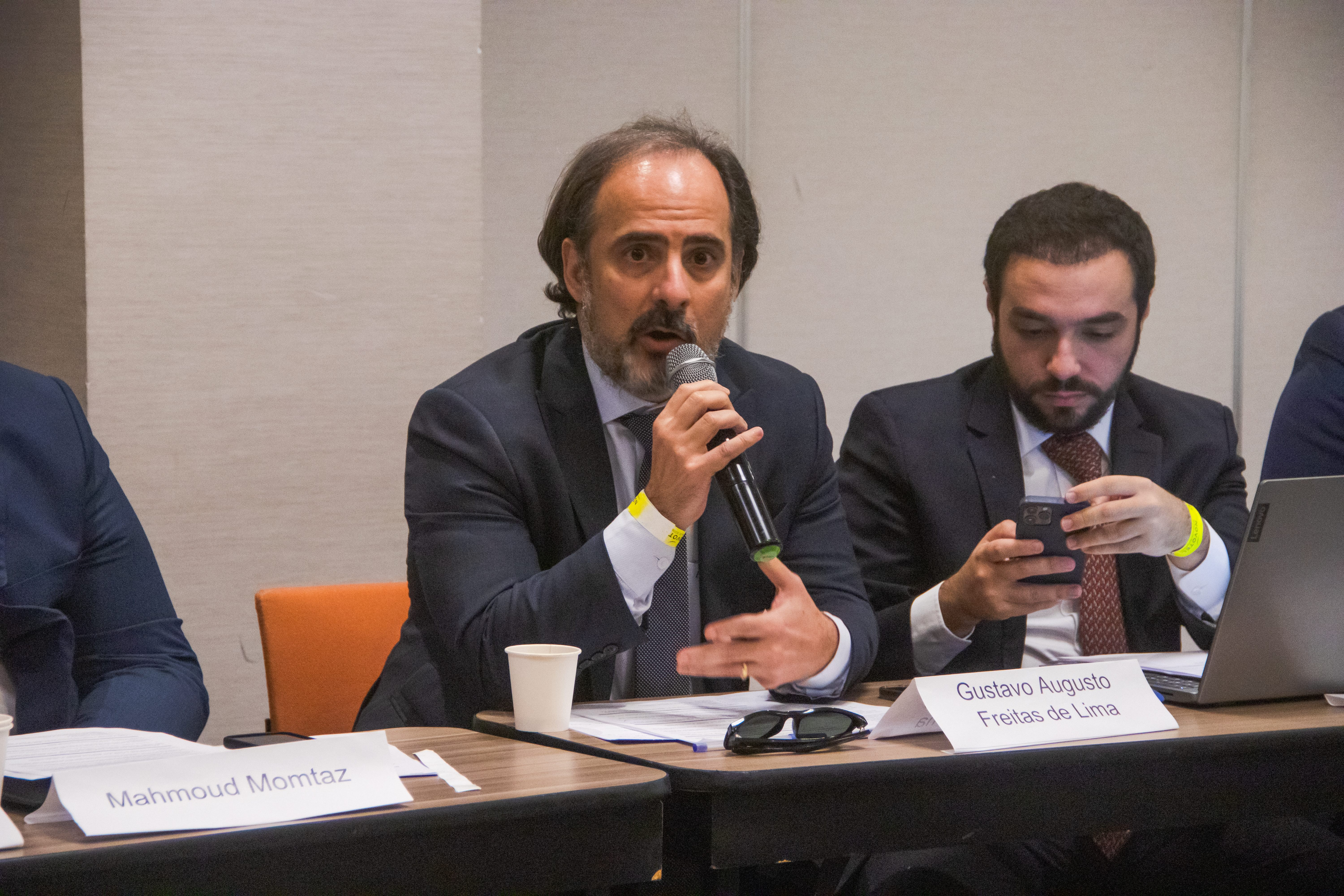 Gustavo Augusto Freitas de Lima, Commissioner of CADE, noted that the proposed deal touches on the critical issue of personal data. It can be difficult for regulators to take sweeping measures when dealing with companies that hold large amounts of data. Among the most realistic for Brazil is a 5-year freezing on acquisitions of companies in the relevant market. A pause would allow the market to re-form and reset the forces. It might also be possible to introduce an obligatory notification of transactions, even if the size of assets of companies and their turnover may not reach a price threshold, which would imply the regulator’s approval. Mahmoud Momtaz, Chairman of the Egyptian Competition Authority, agreed, stressing that in such deals it is important to consider how the regulator's actions would affect the market in the future and whether they would preserve contestability and not stifle innovation.

Continuing the discussion on possible remedies, Ricardo Medeiros de Castro, Deputy Chief Economist of CADE, spoke out against rigid measures that would forbid companies to use the data they have at their disposal. However, he noted, there could be some problems with other regulators who deal with confidentiality and data privacy issues.

The experts also discussed opportunities for cooperation within BRICS in developing remedies on digital markets. Alexey Ivanov made a proposal to issue a joint guideline for transaction review in order to formulate a generally accepted and comprehensible protocol for action. In addition, there was a call to create an inter-agency BRICS trustee, whose decisions would operate for all the markets on global and regional levels.

"This is what institutionalized cooperation is all about — the BRICS alliance has both the means for this, and the expertise that each country can bring to the table, and the potential behavioral remedies which could be reviewed by this trustee ,"

The BRICS+ Digital Competition Forum, which took place over 2 days, was organized by the International BRICS Competition Law and Policy Centre  together with the Law School of FGV University and the Administrative Council for the Economic Defense of Brazil (CADE). The event was attended by heads and representatives of competition authorities of the BRICS+ partners and candidate countries (Argentina, Egypt, Indonesia, Kazakhstan, Uzbekistan), as well as experts and researchers from around the world.

* banned and designated as extremist in Russia