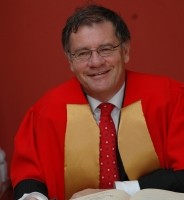 President of the Competition Appeal Court

Judge Dennis Davis was educated at Herzlia School, Universities of Cape town (UCT) and Cambridge. He began teaching at UCT in 1977 and was appointed to a personal chair of Commercial Law, in 1989. Between 1991 and 1997 he was Director of the Centre for Applied Legal Studies of the University of the Witwatersrand. He held joint appointment at Wits and UCT 1995 - 1997. He was appointed a Judge of the High Court in 1998 and as President of the Competition Appeal Court in 2000. Since his appointment to the Bench, he has continued to teach constitutional law and tax law at UCT where he is an Hon. Professor of law.

Dennis is a member of the Commission of Enquiry into Tax Structure of South Africa and was a Technical Advisor to the Constitutional Assembly where the negotiations for South Africa's interim and final constitutions were formulated and concluded. He hosted a TV programme, Future Imperfect which was an award winning current affairs programme between 1993-1998.

He has been a visiting lecturer/professor at the Universities of Cambridge, Florida, Toronto and Harvard.