The Promise of Computational Competition Law and Economics 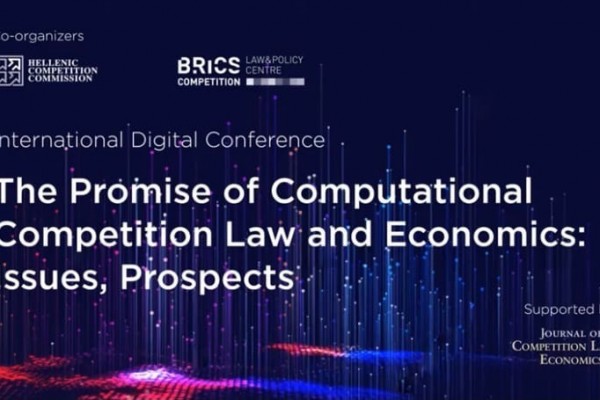 Gathering legal and economic experts, as well as members of Competition Authorities, the aim of this event was to discuss policy and legal issues arising from the increasing use of computational tools in competition law enforcement and to examine the prospects of applying Artificial Intelligence techniques in this field, in the future.

Competition Authorities around the world are encountered with issues arising from an ever more complex economy and increasingly rely on the use of computational techniques (Big Data, Artificial Intelligence, machine/ deep learning) in enforcing competition law. The Conference addressed the challenges encountered by competition authorities in integrating such techniques and advanced learning in the legal framework of competition law enforcement, examining in particular the legal requirements with regard to the standard of proof, procedural rights and investigation procedures. Based on computational techniques, software screening tools for investigating collusive conduct have been applied by several Competition Authorities.

Ioannis Lianos, President of the Hellenic Competition Commission, stressed the importance of the conference:

Alexey Ivanov, Director of BRICS Competition Law and Policy Centre, pointed out that:

"We need to pay more attention to the digitalization of the activities of the power structures themselves. It is advisable to determine approaches to the regulation of digital platforms and digital ecosystems, to develop a policy for further actions within the framework of digital transformation. A number of authorities in Russia, including the antimonopoly authority, are already using digital tools that are aimed at preventing illegal actions in the markets. We can draw attention to the successful experience of introducing digital technologies in the activities of the antimonopoly authorities of Brazil, India, and China".